From reporting on a recent visit NFL star and activist Colin Kaepernick, to showcasing participants' visual haikus, the budding journalists of the New Media Journalism class at the Lower East Side Girls Club has the news covered. "In New Media Journalism," according to program director Rana Emerson, "members learn digital content creation to express themselves and create awareness around issues they care about." Participants in the class learn the ins and outs of journalism in the digital age, telling the stories in and around the Girls Club, like its participation in Photoville 2018 where they the Girls Club exhibited its photo essay, "Power of Pink." Their presentation platform is a multi-media blog, called Girls Club New Media with audio, video, and photo/essay pieces created by the girls about their community. 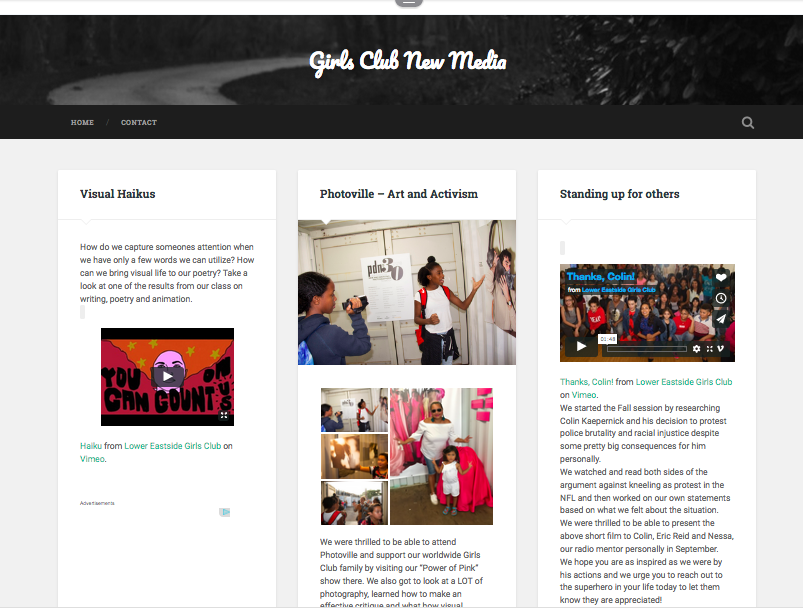 SPRING 2018 - As a spring project, ACE students engaged in Passion Projects, in which each student reflected on one thing they feel passionate about, wrote about why this thing --traveling or gaming or singing-- captivates them, researched to learn more about this topic or activity.

SPRING 2018 - At the DYCD-sponsored Celebration of Student Achievement, held at the National Museum of the American Indian on May 22, 2018, 6th grader, Archad Ouedraogo, a Childrens's Aid Bronx A-Lit participant at C.S. 211 was presented a piece that won him the chance to stand among adult learners. He was the only school-age student presenter! Congratulations, Archad!

​"Why Soccer is the Best!" by Archad Ouedraogo
Soccer is the best sport ever. There are so many reasons that I love soccer, and one of those is that when you play a lot of soccer you could lose weight. Soccer is all about fun. Even when you are watching soccer, I find it fun too. Sometimes it feels like most people that play soccer are Spanish or at least Spanish speaking.

The rules of soccer:
One rule in soccer is that you can't touch the ball with your hand, except the goalie. They are the ones that have to block the ball from entering the goal. They ear special gloves to protect their hands though. Another rules in soccer is that if you injure someone badly you get a red card. You sit out for the rest of the game.

How people communicate in soccer:
When people are open in soccer, they might say, "Hey I am open!" When you're in the center of the opposite goal, I will say "center" so that other players in my team can find where I am and pass me the ball. Sometimes kids are not team players and can be mean saying things like calling you "garbage." You shouldn’t listen to them.

The best soccer player in the worlds:
Cristiano Ronaldo got more skill and goals. He's from Portugal but plays for Real Madrid, which is a team from Spain. He also earns a ton more money than the average profession players. But Leonel Messi has more fans than Ronaldo. He's from Argentina. He also plays for a Spanish team called Barcelona. Paul Pogba is the best defender I think. He's from France but plays for Manchester United, a British team. Those are the best soccer players in my opinion.
​
Countries that play soccer:
I wish it were more popular here in America. But I know that most of Europe have soccer teams. Lots of South American and Africa have teams too. The FIFA is coming up soon, and countries from all around the world compete in this huge tournament. Soccer is fun when you put hard work on it, and if you're good at soccer it is even more fun because then it is more challenging when you know you are playing against skilled players. If you play soccer and you're from an international team, you can earn millions of dollars. Imagine having fans calling your name. One day I hope to maybe become a soccer player!

Speeches written and presented by Darwin and Karina at Union Square LEAP unveiling event, May 2018

My name is Darwin. My classmates and I worked hard on this art project. We loved the experience of makim art with a message. We chose bullying becasue it happens at our school, at P.S. 211. People who are bullied and bystanders should always tell an adult. We propose love and support as a way to solve the effects of bullying. If someone is bullied in our school, we will report it to an adult and we will offer emotional support. Thank you.

Making the Case and Winning the Debate at C.S. 211

​Two sixth graders from A-Lit, the Adolescent Literacy Program at C.S. 211 in the Bronx, made their arguments and walked away with champions in May, during the 2nd annual SONYC Debate Tournament held by the City's Department of Youth and Community Development.

Seven students from the Adolescent Literacy Program joined the SONYC Debate Program this school year. The subject for this debate season was: Should United States citizens 18 years or older have mandatory voting? With the help of Ms. Loretta from SONYC, the students were exposed to many different arguments for this complex topic. They needed to prepare a Pro argument and a Con argument, teaching them to look at a subject from both sides to better understand it. How can mandatory voting be harmful or beneficial to the voice of the underrepresented population?

Using articles given to them and some they researched themselves, they put together their arguments with their partners. They practiced the timing of their speeches and learned the skills for asking their opponents questions to break apart their position. Playing simple games helped them master the skill of persuasion and defensive thinking to help keep their argument alive.

Through the SONYC Debate Program they learned an assortment of skills, such as: public speaking, leadership, team work, researching, essay writing, and many more. The first part of the tournament was a learning experience that brought down their egos and pride and helped them realize there was more work to be done if they wanted to convince the judges to vote for their argument and not their opponent's. The second time around they added facts and sources into their speech and listened to their opponents instead of thinking of a witty come back. They focused and it paid off, with two students -- Darwin Alexis and Archad Ouedraogo-- each winning trophies for their team. Next year, they will be ready and better than ever to face their competition.

The Big Storm Game Part I:
​ The Circuit of Life
A narrative 'zine by the Lower East Side Girls Club
​March 2018

A Memoir
​is a Small Moment in Time
Memoirs written by A-Lit Students at CS 211, January, 2018

The Day I Met My Nephew
By Jayis P.

In 2014, on a cold November day, I was currently on my way home from an after school thanksgiving celebration and heard that my sister was going into labor. I didn’t even know what to say! I was happy to have a nephew! “What? Really? I thought she was due in two days,” I said.
My mom and dad were slightly upset because of how busy they are and they couldn’t really take care of a grandson while his mother is working because they didn’t have the time. It was that day and I was so happy because he was going to be my second nephew. But the difference is he lives in New York, not Georgia. I was so in my thought, asking questions like, “What is he going to look like? Is he going to look like his mom or dad? Is he going to be skinny of chubby?” All of these thoughts were racing through my mind, but soon I was off to sleep and enjoyed my weekend. To my surprise my sister and her boyfriend brought a beautiful boy into the world (2 days later).
My father drove home from a nearby hospital where my nephew was born. My siblings and rather came through the door, my dad holding the small infant in a car seat. I went to hug my family members making sure to be careful with the baby. I let all the elders hold him first, then it was my turn. My sister told me to sit on a chair and explained the position I had to hold him in. She gave him to me and I though, Wow, this is what I have to deal with half of my life, and he began to cry. Four years later he’s a smart three-year old who messes around and gets in trouble by my mom and his mother and he’s gotten harder to deal with, but he will always be my bup, even though he’s annoying. I love him so much.

Reflections on a Visit to West Farms Library
​by A-Lit Students at CS 211, December 2017 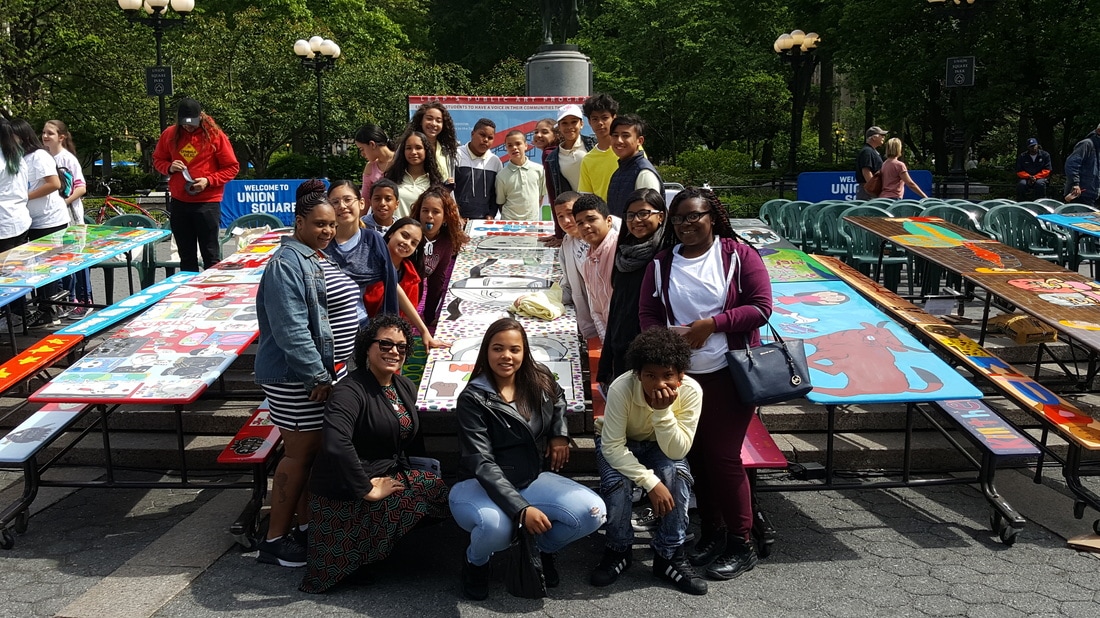